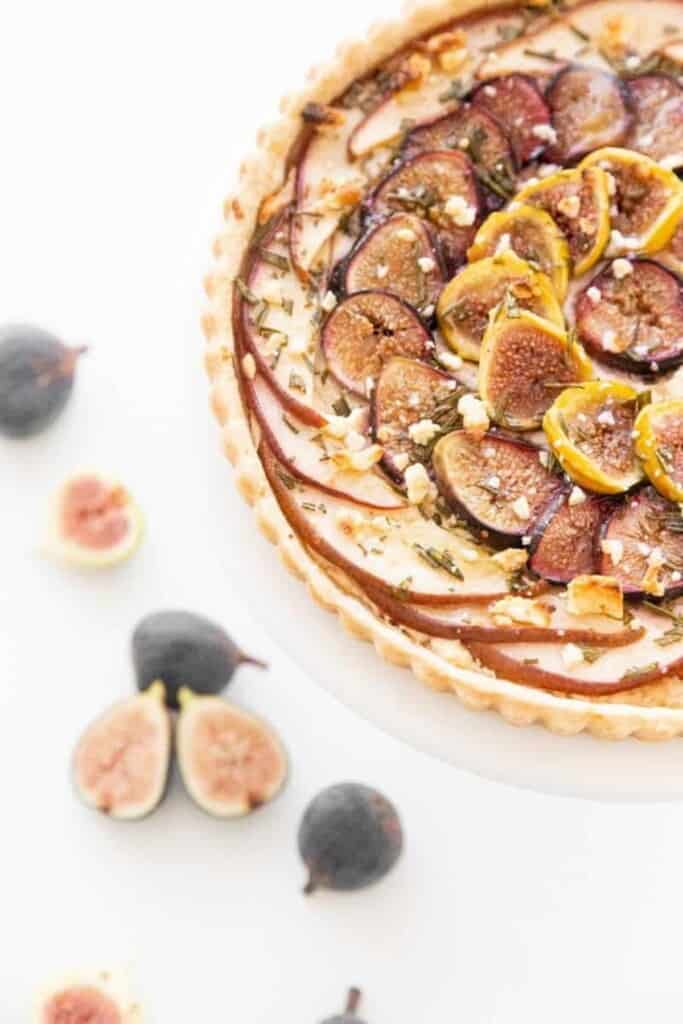 Pear and fig tart. This November I wrote another Thanksgiving article for Feast Magazine, the November 2018 issue. And I happened to be the cover shot as well.

When it comes to autumnal flavors, we tend to think of apple and pumpkin recipes galore - yet pears are one of the most delicious fruits of fall. Plus, pears have a soft and buttery texture, perfect for eating raw or folding into your favorite seasonal dishes. In the following pages, I've put pears to work in seven ways, from baked treats and stuffing to mulled wine and a savory puff pastry hors d'oeuvre.

This Thanksgiving, integrate pears into your feast as an appetizer, side dish or sweet last course: The savory tart and puff pastries pair perfectly with the spiced mulled wine for pre-dinner entertaining, while the sausage-pear dressing and vegan pumpkin-pear soup fit right in with all your favorite holiday staples. End your meal with the mini pear pie crumbles or maple-pear cheesecake - or both! After all, just like the holidays, pear season is fleeting and should be savored.

With about 3,000 varieties of pears grown across the world, it can be hard to know which to use for what. Most pears are in season in November, though, so feel free to experiment. Just be sure to test the texture of pears before buying them, but be gentle - pears bruise easily. Look for fruit with soft skin around the neck.

These personal-sized pies are as fun to make as they are to eat. They keep the shape of the pear halves - for a pleasing photo finish - and the crumble and toppings allow you to customize each one.

Pears for Cooking and Baking

These pear varieties hold their shape for cooking and baking, and can also be consumed raw.

Concorde A cross between Comice and Conference pears, Concordes have a yellowish-green skin, dense texture and a juicy, vanilla-like flavor.

Asian Also known as a Chinese pear, Asian pears have a sweet flavor and complex texture, ranging from juicy and crunchy to firm and granular. They vary in size and color, from large and golden brown to small and green.

Bosc Sometimes called a buerre Bosc, Boscs are all-purpose winter pears with long, tapering necks and dark golden skins. They have a slightly gritty yet juicy texture and a sweet, buttery flavor.

These pear varieties are the best for eating raw or using in salads, for canning, jam-making, and drinks.

Bartlett Bell-shaped Bartlett pears come in a range of colors - yellowish-green, red and light green - and have a smooth, buttery texture and sweet, slightly musky flavor. In the U.K., they are more commonly known as Williams pears.

Comice Known as Doyenné du Comice in France - which translates to "top of the show" - this broad, blunt variety has a greenish-yellow to red-blushed yellow skin, a smooth, firm texture and a sweet flavor.

Forelle Believed to have originated in northern Saxony in the 17th century, Forelles are thought to be one of the oldest European pears. Their signatures include a coloring - forelle means trout in German, and the fruit was named for its resemblance to rainbow trout - crisp texture and tangy flavor.

Some pears are too juicy and soft for cooking or baking and will fall apart. There are exceptions, though: I suggested Bartlett, Comice or Forelle pears for the pumpkin-pear soup and spiced pear mulled wine recipes, as their softer texture will aid, not inhibit, the final results.

Ingredients for Pear and Fig Tart

- 2 tablespoon Feta, plus more for garnish

How to make Pear and Fig Tart

2. Roll out pie-crust dough and place inside a lightly greased and floured tart pan. Push dough against edges and into the corners of pan; remove and discard excess.

4. Using your hands, arrange pears and figs over chÃ¨vre, first layering pears along the outer edge and adding figs as you move inward. Brush entire top of tart with remaining honey-herb mixture; sprinkle Feta on top.

Did you make this recipe and just love it? Awesome! If you have a quick minute and could leave a star rating and comment below, I would appreciate the support and knowing your feedback! And if you’re over on Instagram, be sure to tag me in your photos!

- Pie dough: You can use a store-bought or homemade pie dough (recipe on my site). - Pears: I used specific pears that would cook and hold up in the oven. You can swap, but I can't guarantee how they will hold up.
Tried this recipe?Mention @amanda.wilens

My name is Amanda and I am an event planner, recipe developer, photographer, and stylist. I created this space where together we can together Plan, Plate, and Celebrate! Whether you need tablescape ideas for entertaining or a simple and delicious recipe for cookies, you can find it all on this website...more about me.